Israel is constantly threatening to attack Iran, but it has long been assumed that it would come with some advanced notice to the Obama Administration, if only based on the hope that the US would join in. 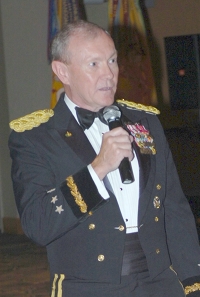 General Martin Dempsey, the head of the Joint Chiefs of Staff, isn’t so sure about that however. Speaking to Reuters Dempsey said he had no idea if Israel would actually warn the US ahead of time.

Dempsey said the US was convinced that the “right path” involved ever increasing sanctions along with “the stated intent not to take any options off the table” but said he wasn’t sure Israel agreed.

The US, of course, regularly threatens to attack Iran in the course of the “all options on the table” conversation, but Israel has said they need to threaten more often, and in recent weeks speculation has risen that Israel will attack unilaterally before winter.

7 thoughts on “Would Israel Tell US Before Attacking Iran? Gen. Dempsey Not Sure”