Iran plans to send military ships close to the United States’ Atlantic coast, according to the head of the Iranian Navy, Rear Admiral Habibollah Sayyari. 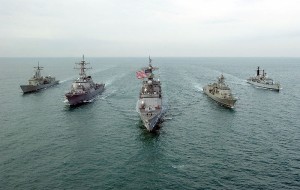 “Like the arrogant powers that are present near our marine borders, we will also have a powerful presence close to American marine borders, Sayyari said on Tuesday without giving specifics as to when such a deployment could happen or the number or type of vessels to be used.

For years the United States has patrolled a fleet of Navy warships off the Iranian coast in the Persian Gulf, something seen as threatening to Tehran. In January of last year, the Obama administration accelerated the deployment of military vessels off the Iranian coast and placed antimissile systems in at least four Arab countries neighboring Iran.

Most notable is the US Navy’s Fifth Fleet based in Bahrain – less than 160 miles off the Iranian coast – which directs operations in the Persian Gulf, Red Sea, and Arabian Sea and secures the Straits of Hormuz, through which 40 per cent of the world’s seaborne oil passes. It is one of the largest military forces in the region, with over 40 vessels and close to 30,000 personnel.

These and other US Navy warships patrol the waterways along Iran’s southern border on a daily basis, often with the explicit intention of provoking Iran. In 2007, the Bush administration deployed “the largest daytime assembly of US warships in the Gulf since the 2003 Iraq war to hold drills off Iran’s coast in a major U.S. show of force.” The assembly included about 17,000 personnel and 140 aircraft in addition to the usual, and was sent without notifying the Iranian government.

President Obama’s analogous show of force last year was described by the New York Times as “part of a coordinated administration strategy to increase pressure on Iran” and also “intended to counter the impression that Iran is fast becoming the most powerful military force in the Middle East.”

The announcement by the Iranian Navy official comes weeks after the US got Turkey to agree to host a NATO anti-ballistic system aimed at spotting missiles coming from Iran. Turkey had agreed to the deal with the explicit condition that its neighbor Iran not be named as the impetus, strongly suggesting Iran was the primary target.

This demonstrates another aspect important to the context of US militaristic provocation towards Iran. Aside from warships to Iran’s south, the US makes major arms deals and sends significant amounts of security assistance to nearly all of Iran’s neighboring countries including Turkey, Kuwait, Bahrain, United Arab Emirates, Oman, Pakistan, Turkmenistan, Azerbaijan, not to mention the two hot wars and client states the US is engaged in directly to Iran’s east and west in Afghanistan and Iraq.

Iran’s supposed plan to place navy vessels somewhere near America’s Atlantic coast, as the official who announced it said explicitly, is merely a response to the decades worth of US militaristic provocation towards Iran. Some in the US are objecting strongly to this, seeming implicitly to state that America doesn’t have to abide by the same rules Iran does and that America should not have to accept the obvious repercussions of aggressive foreign policies.

30 thoughts on “Iran Could Deploy Navy Near US Coast, Says Iranian Official”