Rep. Sue Myrick (R – NC) cancelled all of her public appearances for 9/11 yesterday, remaining at home because she was convinced Iranians were plotting against her, claiming her name turned up in a “threatening Iranian state newspaper article.” 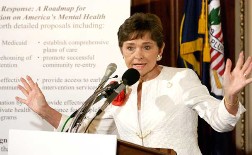 Well, not exactly. She told the Charlotte Observer that, but the actual article appeared on the website of PressTV, the Iranian state television station. Hawks were making hay about this “hit piece” for weeks, claiming that PressTV was encouraging attacks on Rep. Myrick and the others, who Rep. Myrick didn’t want to mention.

So whodunnit? Osama bin Laden? Some radical Islamo-fascist Ayatollah? How about high profile liberal thinktank The Center for American Progress. The less scary but decidedly funnier truth is that the article which PressTV ran was copy-pasted from a PDF report available on the liberal think tank’s website.

In fact, readers of Antiwar.com might have already heard about this report, because the day before PressTV did their copy-paste magic, Eli Clifton, one of the co-authors, appeared on Antiwar Radio to tell Scott Horton all about it.

So, to sum things up, Rep, Sue Myrick, who spent the last several years rambling on about Islamic “infiltration” into the US government and demanding people stand up to the perils of Muslim interns, missed her 9/11 photo ops yesterday because Eli Clifton et al mentioned her name in a policy report. Funny how things work out.