Though it was assumed that the Super Committee would have to look at the record military budgets if it was to do anything meaningful about the deficit, the very notion that it might be considered was itself such an outrage to one Senator that he threatened to quit if it is ever brought up again. 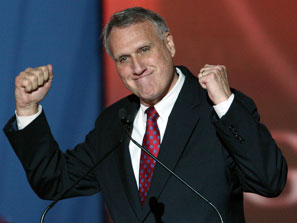 In a luncheon meeting meeting sponsored by hawkish think tanks, Sen. Jon Kyl (R – AZ) angrily declared that he was “off of the committee if we’re going to talk about further defense spending.” So far the only “cut” made to military spending was a largely illusory $350 billion pledge to cut the rate of future growth several years down the road.

This should please the various arms makers who are meeting with Defense Secretary Leon Panetta, as Panetta seeks to reassure them that he is firmly against the cuts, which he termed a “doomsday mechanism.”

The US military’s budget, as it stands, is the largest in the history of mankind. That each year going forward will be an even bigger budget is taken as a matter of course by the committee, and Sen. Kyl’s anger stems primarily from concerns that those future record budgets won’t be big enough increases over the previous year.