Public protesters massed in front of the Israeli embassy in Cairo this evening, demanding the expulsion of the Israeli ambassador. The situation escalated with the arrival of security forces erupting in clashes that left at least 187 wounded. 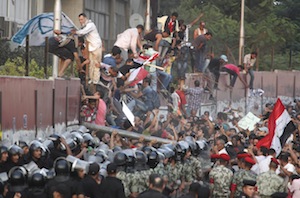 The protesters fought their way into the building, knocking down one of the walls surrounding the 21-story building and making their way to the higher levels, where the embassy and offices are, tearing down the Israeli flag and sacking the embassy.

Soon, massive numbers of documents began flying out of the windows, as protesters apparently reached an archive office. Israeli officials initially claimed that only pamphlets from the foyer were taken, but thousands of pages of “confidential” documents were reported to have been tossed as well.

The protests were related to the killing of Egyptian border police last month, apparently the result of Israeli military fire in the wake of a terror attack. At this point it is unclear how much damage the embassy has sustained, and perhaps the real story will be if any of the documents leaked out of the window and onto the street will be of any significance. Unconfirmed reports have the ambassador fleeing back to Israel.