In his latest interview promoting his new book, former Vice President Dick Cheney championed the Iraq War as the “right policy,” insisting the 2003 occupation was a “sound policy.” 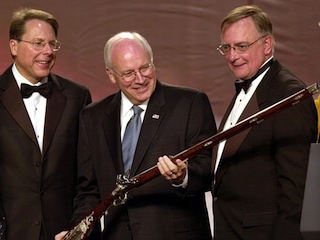 Incredibly, with a nearly endless list of faulty excuses for the war already at hand, Cheney invented an entirely new one to defend the conflict, claiming that if the US hadn’t attacked Iraq on the basis of non-existent nuclear weapons, Moammar Gadhafi, whom the US is attacking now, would have nuclear weapons.

He then went on to term himself a “big advocate” of waterboarding, the practice of simulated drowning roundly condemned internationally as a form of torture. Cheney insisted that the waterboarding of suspects had “kept the country safe” for more than seven years.

Cheney has enjoyed something of a renaissance in the media with his book release, transitioning from a reviled warmonger and torturer into a respected elder statesman regaling reporters with his history of warmongering and torture. In spite of this, human rights groups continue to call for the Justice Department to investigate Cheney over the war crimes he committed, particularly those he admits to in the book.