The Iowa Republican President Debate spent much of its time, predictably, meandering ever so close to issues of substance, before quick and dramatic retreat from serious stances and back to the safety of sloganeering. 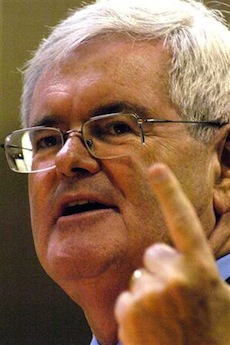 After an hour, or so, the topic of foreign policy finally came up when Newt Gingrich was asked about the war in Libya. Gingrich’s answer, when he was finally done berating the questioner, was to rail on about Iran, insisting the nation had “gone on the offensive” against the US and needed to be confronted.

This set the table for a round of questions during which the assorted candidates tried to outhawk one another on Iran, while railing against Rep. Ron Paul (R – TX), the only dissenting candidate on the matter, for not supporting the war.

Former Gov. Tim Pawlenty went hard and fast on the question of Iran, not just supporting the notion of attacking the nation but praising the “good works” of the US government in assassinating Iranian scientists and the “good work” of creating the Stuxnet computer virus, which threatens to do massive damage to industrial computers far beyond Iran.

Not to be outdone, former Sen. Rick Santorum condemned Rep. Paul as identical to Barack Obama on foreign policy and insisted that if the Iranian govenrment acquired a single nuclear weapon “the world will be no more!”

Little discussion was had on Afghanistan, with the handful of candidates addressing the matter declaring that they would do whatever the generals wanted. Iraq was not mentioned in any substantive way, nor were Yemen or Pakistan.

34 thoughts on “GOP Debate on Foreign Policy: All About Iran”