US District Judge James Gwim today rejected Obama Administration arguments to the contrary and allowed the lawsuit by a former US military contractor against Donald Rumsfeld for torture to continue. 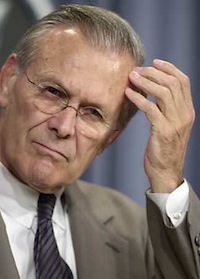 The contractor, whose name has not been made public, was working as a translator for US Marines in Iraq, but when he was about to return home on leave he was captured by the military and held without any justification, being held as a “high-value” detainee at Camp Cropper for nine months, during which time he was repeatedly tortured. The contractor was never charged with any crimes, and was eventually just released by officials without any explanation.

The Obama Administration made multiple arguments to the judge about why such a lawsuit shouldn’t be allowed to proceed, claiming simultaneously that Rumsfeld was immune from lawsuits over crimes committed while Defense Secretary and that the courts don’t have jurisdiction over abuse of US citizens during times of war.

The Justice Department also claimed allowing the lawsuit might affect the decisions of future US officials who might have to decide whether or not to torture a US citizen for no reason.

Gwim insisted that even though “the stakes are high” US citizens were still entitled to due process when they are detained by the US military abroad, citing a similar ruling about two other contractors who were seeking to sue Rumsfeld after accusations that their company was engaged in “illegal activities” also led to a long, torturous stay at Camp Cropper.

14 thoughts on “Judge: American Can Sue Rumsfeld Over Torture”