Altaf Hussein, the founder and leader of the Muttahida Qaumi Movement (MQM), has a history of condemning the Zardari government, but today used a high profile party conference to accuse the civilian government of secretly being in league with the US to undermine the nation’s military. 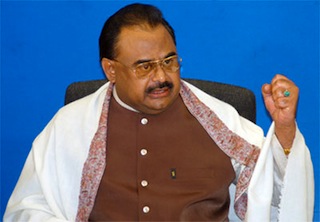 Hussein cited recent “conspiratorial behavior” by the government, particularly in its actions in Karachi, as evidence of his allegations. MQM is a hugely powerful party in Karachi, and recent political violence in Karachi has centered around tit-for-tat attacks between them and the ANP, a faction allied with Zardari’s Pakistani People’s Party.

Last year, Hussein responded to a split between MQM and the PPP to call for a military coup and the declaration of martial law on the grounds of growing corruption among the government’s officials. He condemend US support for the government then as well.

Hussein’s comments reflect growing discord between the civilian government and the military, both of which seem to be losing credibility at an alarming rate in the wake of the nation’s unpopular involvement in the US wars in the region and both of which are keen to deflect blame.

One thought on “Opposition Figure: Pakistani Govt, US Conspiring Against Military”