The war in Libya has been extremely controversial for a number of NATO member nations, and US officials have taken to task a number of nations, including Germany and Poland, which outright refused to participate. But the opposition appears to be growing. 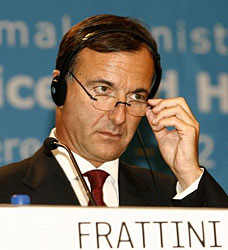 Now it is a key participant in hostilities, Italy, which is withdrawing from the war. Italian Foreign Minister Franco Frattini cited recent NATO air strikes around Tripoli killing large numbers of civilians and called for an immediate end to the war and a creation of corridors to allow humanitarian aid into the nation.

Which sparked angry condemnation from a number of officials, who are really sold on the three month old war’s continuation. NATO’s Secretary General Anders Fogh Rasmussen, though not addressing Italy specifically, vowed the war would continue.

French Foreign Ministry officials were more directly hostile to Frattini’s call, as France has been the most outspoken advocate of the conflict. They condemned the call for humanitarian aid as a “sign of weakness” and insisted two weeks ago everyone was “unanimous” in their agreement for escalation and that it must continue.

Though the war can and will certainly continue without Italy’s direct involvement, many of the attacks are being launched from Italian soil. If the Italian government is serious about ending the conflict, they could make its continuation extremely inconvenient for the rest of the alliance by expelling them from southern airfields.