A suicide bomber rammed a pickup truck full of explosives into an area full of government buildings today in Hangu, killing at least 32 people and wounding over 60 others according to security officials. 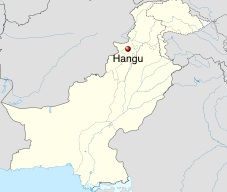 The truck actually hit the main headquarters of the Communications and Works Department, which was next door to a district police station and the courthouse. At least 10 of the slain were reported to have been police.

In addition to damaging a number of government buildings, police say that the strike also damaged at least 15 shops. A number of the wounded were civilians at a restaurant. The Tehreek-e Taliban Pakistan (TTP) reportedly took credit for the attack.

The strike is expected to fuel even more discontent toward Pakistan’s military, which is already under increased criticism for its failure to prevent unilateral US raids into its territory. It seems no more able to defend against attacks from internal factions.