Speaking one day after President Barack Obama’s address to their national conference, AIPAC Executive Director Howard Kohr warned the president against treating both Israel and the Palestinians “even-handedly.” 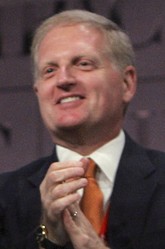 According to Kohr, treating both sides equally would mean “Israel is authomatically at a disadvantage” and that it would put “Palestinians and Arabs” in a better position. The comments echo Israeli Prime Minister Benjamin Netanyahu’s angry condemnation of the notion of a return to the 1967 borders.

Of course in yesterday’s speech, Obama already completely disavowed his previous comments about the 1967 borders. Prime Minister Netanyahu likewise insisted that Obama’s furious backpedal was acceptable to him. This Kohr’s rebuke of Obama seem like kicking a man when he’s down.

Kohr went on to insist that even the suggestion of equal treatment by the US in brokering a peace deal would make such a deal impossible, and that only by insisting the US and Israel have identical positions would the Palestinians ever agree to a deal. The talks ended in September after Israel refused to pause expanding settlements into the territory of a potential Palestinian state.