The White House was quick to release photos showing a large number of top officials “watching the action” during the raid that killed Osama Bin Laden. Despite this, officials say the 25 minutes of key footage “doesn’t exist” because of a blackout in the cameras mounted on the troops. 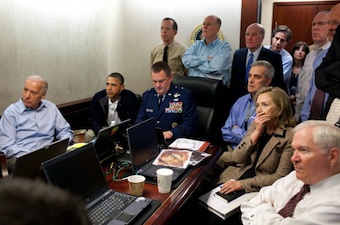 What this means, of course, is that there will be no release of any video footage of the raid. Coupled with troops throwing the body into the ocean and the administration declining to release any photographs, there is a distinct paucity of evidence.

Of course al-Qaeda also confirmed the death in a statement, so this isn’t exactly in doubt itself. What is in doubt however is the official story of the killings, which the administration has repeatedly changed.