The resignation of the Syrian cabinet on Tuesday was the strongest move yet by President Bashar Assad in his effort to placate the growing protest movement, but the protests continued to grow over the lack of reforms announced to accompany the resignation. 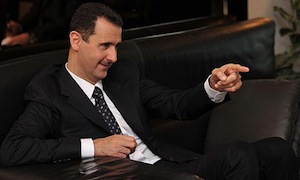 Assad was also greeted with some pro-regime protests around the capital city of Damascus, and is expected to appoint a new cabinet on Wednesday. Since the cabinet holds comparatively little power in Syria, even a dramatic change in its composition is unlikely to change much on the ground.

And indeed, the protest movement is calling for mass protests on Friday, a delay which would give Assad time to announce those reforms, if indeed they are actually coming. Assad is expected to give a speech some time early Wednesday addressing the rallies, but there has been no indication of the content of the speech.

The anti-Assad protests began comparatively small around the city of Daraa, but violent crackdowns swelled their numbers repeatedly, and now the movement appears to pose a serious threat to the regime’s control over the country. The utter failure of the crackdown echoes similar results in Yemen, and suggests that violence is no longer the cure-all to regional dissent that it used to be.