Having cleared the Pearl Roundabout of protesters, the Bahrain regime Friday destroyed the centerpiece, the Pearl Monument, in what appears to be an effort to spite the protesters and deny them a key symbol for their movement. 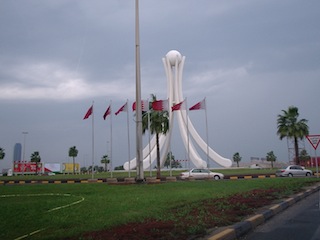 The Pearl Monument was erected in 1982 to celebrate a GCC summit, and was ironically a symbol of GCC ties for years. Now, with GCC troops marching in the streets to crush popular protest, the protesters had been rallying at the monument for some of its key protests.

The official line for the government is that the monument was torn down to satisfy the protesters’ demands of “improved services,” arguing that it would relieve traffic congestion in the roundabout. Since the roundabout is facing military attack on a fairly regular basis, however, this is just a talking point.

Despite the declaration of martial law earlier this week making public protest illegal, thousands of protesters continued to take to the streets on Friday, focusing on complaints about the foreign military intervention as well as the crackdowns by the Bahraini military.