Though he is hardly the first Republican to express doubts about the nearly decade long Afghan War, Mississippi Gov. Haley Barbour’s calls to reduce the 100,000 strong US occupation force and cut the broader military budget suggests those doubts are moving firmly into the Republican mainstream. 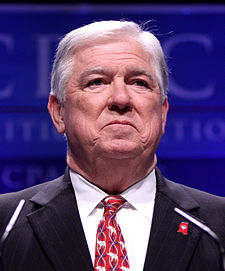 “Anybody who says you can’t save money at the Pentagon has never been to the Pentagon,” insisted Barbour, and that comment may serve to differentiate him from other high profile candidates like Mitt Romney, who is proposing an increase in military spending as part of his platform.

And while Barbour stopped well short of calling for a full withdrawal from Afghanistan, his comments may position him well for such a campaign both in the face of growing war-exhaustion (recent polls show the war strongly and increasingly unpopular) and a spiraling budget deficit which is likely to be a top issue in 2012.

Perhaps more important, however, is that the comments will give questioning the war more mainstream momentum amongst the Republican leadership, which has previously treated such questions as taboo, and may give more momentum to the freshmen Republican Congressmen who suggested military cuts could be part of the financial solution.