Bahraini MPs (nearly half of whom resigned yesterday) are calling again for the immediate ouster of the monarchy and the entire government as what started as peaceful protests on Friday turned into yet another bloodbath. 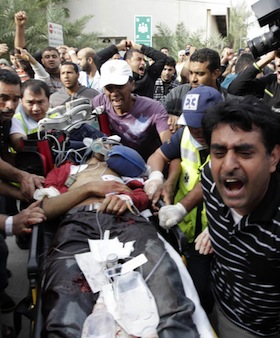 The protesters were marching on the hospital, where hundreds of wounded were taken after the overnight massacre in Pearl Square, when they were met on a residential street by a large number of military forces, including tanks, who opened fire using live rounds just 300 meters from the hospital.

This led to another influx of wounded into the already overwhelmed hospital, before the military and police decided to start blocking the medical teams from bringing in additional casualties. This has left scores if not hundreds of victims in the streets, within visual range of the nation’s largest hospital but with no hope of the hospital’s crews reaching them.

Doctors reported that amongst the hundreds of new casualties most were shot in the head or chest, and that a large number of the wounds appear consistent with sniper attack. The overall death toll of today’s attacks is unclear, of course, with large numbers of bodies still in the streets, but the hospitals have confirmed at least 10 additional dead so far.