While a number of officials are wondering what went “wrong” in Egypt, where the US-backed dictator Hosni Mubarak was chased from office in 18 days of escalating protests that no one in the intelligence community seemed to see coming, the more timely question now may be “who is next?” 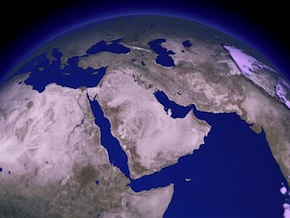 The intelligence failures in Egypt have undoubtedly led to a lot of second guessing, and the Obama Administration’s constant speeches trying to catch up with a changing story only underscored an intelligence community that was totally lost from the beginning to the very end.

But while officials continue to give lip-service to the idea of “stability” in the region and the CIA insists they have formed a new 35-man “task force” to try to guess where the next revolt will be, the reality is there are an awful lot of candidates left and an awful lot of unrest to go around the region.

Surely, the obvious “next” candidate is Yemen, which not only has the same sort of multi-decade ruling US backed dictator as Egypt, and a number of active secessionist movements. But protests are also continuing in Jordan, cropping up in Algeria and Morocco, and Libya and Syria both seem to be at risk as well.

Perhaps the biggest wild-card out there, however, is in Bahrain, where the king has tried to bribe his way out of trouble by offering a “gift” of $3,000 to every family. This may work for awhile (at least until the checks clear), but Bahrain clearly has long-standing unrest and, should it fall, that unrest could easily spread to neighboring Saudi Arabia.

And don’t forget that fledgling dictatorship in Iraq, either. Prime Minister (and Interior Minister and Defense Minister, etc) Nouri al-Maliki is clearly centralizing power at an alarming rate, a problem doubly concerning since his bloc lost the 2010 elections. This, coupled with the usual incompetence one expects of the US installed regime, has led to growing protests in a nation which still has 50,000 US troops occupying it.

The answer really is that such unrest can crop up virtually anywhere in the region, and nearly every government in the region has made a lot of enemies over the years which, in the face of the current economic downturn, feel they have less and less to lose by open revolt.

7 thoughts on “US Intel Officials’ Question After Egypt: Who’s Next?”