When  the revolution comes, everyone will be prepared. At least in Northern Africa and the Middle East, where upsurges of optimism from the increasingly successful revolts in Tunisia and Egypt have led other nations’ oppositions to plan dates for their own. 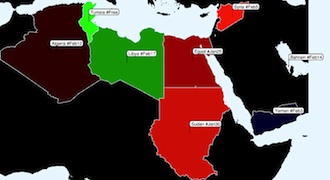 Egypt’s January 25 was such a decisive moment in that nation’s history, and Thursday, February 3 has ambitious Yemenis looking to repeat the success. Syria has penciled in Saturday, February 5, while Algeria, Bahrain and Libya all have “days of rage” planned in the next two weeks.

Of course the downside to having a pre-set “day of rage” like this is that it gives the regimes ample time to prepare curbs on personal freedom that they assume will make everything all better. To that end, Algeria and Libya have announced blanket bans on soccer through the foreseeable future.

Which seems an odd strategy, as if anything the ban on the most popular support and the cancellation of matches much of the nation was looking forward to will probably underscore to the public just how wrong things have gotten, and give them all the more time to dwell on their regimes’ corruption.