After spending last week and much of this weekend comparatively silent about the uprisings in neighboring Egypt, Israeli officials and pundits are suddenly sounding off on the growing rebellion and lashing out at President Obama for his somewhat incomplete backing of Mubarak. 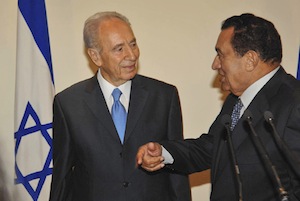 Israeli President Shimon Peres praised Mubarak, insisting the Israeli government had “great respect” for the aging dictator, while he and others angrily chided President Obama for his modest calls for political reform in Egypt, accusing him of “betraying” Mubarak.

The comments are likely to be viewed quite negatively amongst protesters, who were already more than a little irked at US officials saying they wouldn’t support the complete ouster of Mubarak but only some minor reforms and citing Israel as the excuse.

Indeed, despite the Obama Administration’s insistence that they aren’t “taking sides” most are viewing them as propping up the Mubarak government, and not the other way around, a position strongly indicated by the $1.5 billion the US sends him annually.

But now, in the wake of a bloody crackdown on protesters, Israeli officials the world over are demanding that the US and others “curb” their criticism of Mubarak, and telling their ambassadors to warn the world that Israel not only supports Mubarak’s regime unquestioningly, but believes that allowing free elections in the nation could have “very serious implications” on other dictators in the region.

28 thoughts on “Israeli President, Others Slam Obama for ‘Betrayal’ of Mubarak”