Unseemly comments by US Ambassador to Libya Gene Cretz may force the US to reassign him and appoint a new ambassador, according to State Department officials. Cretz has already been recalled to Washington pending the change. 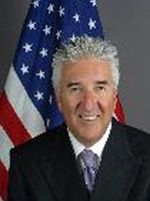 A number of comments by Cretz regarding Libyan leader Moammar Gadhafi came to light in December as the result of the WikiLeaks document releases, and the damage Cretz’s comments have done makes it unclear if he would be able to carry out his duties effectively, according to officials.

Cretz mocked Gadhafi’s fear of flying over water in the cables and insisted he was unable to go anywhere without his “voluptuous blonde” Ukrainian nurse. Officials cited unspecific “complications” in the relationship even before the WikiLeaks releases.

Still, if Cretz is transferred it will be the first of what experts say could be many post-WikiLeaks transfers. The cables revealed similar comments made by ambassadors across a number of nations, and some are predicting a mass shuffling of ambassador to different posts across the world in the hopes of stemming the embarrassment.

One thought on “US May Replace Libya Envoy Over WikiLeaks Tension”