Tunisian officials had hoped to stifle the growing unrest against their government with large-scale censorship of the Internet, as well as moves against the foreign media which sought to cover the protests. 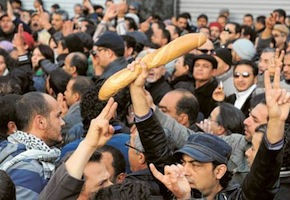 In addition to riling up the public all the more with such draconian measures, the government also appears to have caught the attention of “Anonymous,” the group which had been clashing with opponents of WikiLeaks and launching attacks on the websites of companies moving against them.

Since they started, Anonymous is said to have knocked down at least seven websites, including the Tunisian Ministry of Industry and government-run Stock Exchange. The group said the attacks were directly related to the efforts at censorship and warned that “attacks at the freedom of speech and information of (Tunisia’s) citizens will not be tolerated.”

It is the second time Anonymous has moved against a country in recent days. Last week they attacked the Zimbabwean government’s websites in retaliation for that country’s moves against a newspaper that reported the WikiLeaks cables.