One of the crown jewels of secret pre-Gulf War negotiations was unveiled tonight when the notorious Glaspie Memo, or as it is now known 90BAGHDAD423, was released by WikiLeaks 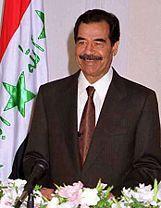 The cable, whose official title was “Saddam’s Message of Friendship to President Bush” details the meeting between US Ambassador April Glaspie and Saddam Hussein on July 25, 1990, just a week before the Iraqi invasion of Kuwait.

The meeting has long been a matter of speculation, as it had long been speculated that comments by Glaspie had led Saddam to believe that the United States was giving them the green light to invade Kuwait if diplomacy failed.

The memo reveals indeed Hussein expressing concern about the Bush Administration’s position on Iraq owing to its participation in military exercises with the United Arab Emirates and pledges to “defend its allies” in the region. He complained the US pledges were making Kuwait and the UAE refuse to negotiate with Iraq. He also expressed concern about negative media coverage in the US, which Ambassador Glaspie assured him did not reflect US policy and singled out a Diane Sawyer report on “nuclear bomb triggers” for condemnation.

Rather Glaspie assured Saddam of Bush’s friendship and expressed support for the negotiations being set up by Hosni Mubarak for the weekend of July 28-30. She also explicitly said the United States took no position on the border dispute between Iraq and Kuwait, though the summary also mentions that she made clear the US wanted the move solved peacefully. Hussein assured that no action would be taken against Kuwait if the negotiations showed some progress, which seemed to suit the US at the time.

But the talks didn’t accomplish anything and by August 2 Iraq was invading Kuwait. Within hours the mutual friendship was completely torn up and US officials were railing against Iraq. A few months later the US invaded for the first time, sparking invasions, decades of enmity, sanctions which killed massive numbers of Iraqi civilians and, eventually, a full US occupation which continues to this day.

19 thoughts on “Glaspie Memo Leaked: US Dealings With Iraq Ahead of 1990 Invasion of Kuwait Detailed”