Even as he tried to stick to the official stance about progress, NATO spokeman Brigadier General Joseph Blotz conceded that violence would escalate yet further in 2011, adding that “there is no end to the fighting season.” 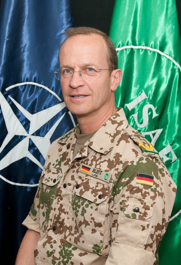 On the other hand, the German general insisted that NATO was finally moving into the “hold” phase of its clear and hold strategy, at least in some parts of the country. This did not, however, appear to mean anything in terms of violence.

The comments are the clearest indication yet that the official claims of “progress,” already coming under serious criticism from a number of fronts, doesn’t come with even the pretense that violence is going to be on the decline, and appears to be completely disconnected from the realities of the war on the surface.

2010 was the deadliest year yet for NATO in Afghanistan, with over 700 troops slain. With 2011 just around the corner it is of particular concern that, once again, the situation is expected to trend worse.

9 thoughts on “NATO General: Afghan War to Escalate in 2011”