The US launched a series of several drone strikes on September 8, killing four children and 20 “suspects.” Most of the suspects were later revealed to be random tribesmen with no connection to militancy, but officials hung their hat on one confirmed kill, Fahd al-Quso, a Yemeni wanted for the USS Cole attack. 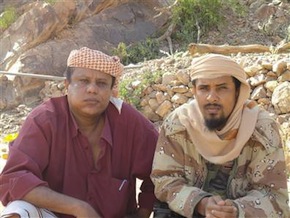 Quso has been a major target for the US for years, and had a $5 million bounty on his head at the time of his “killing.” He was also one of only a handful of high profile deaths among the hundreds killed in the drone strikes in the past several months.

He is also, like so many drone casualties before him, very much alive, as he was interviewed last week, photographed in good health and apparently totally unharmed, in Yemen last week.

Quso is a wanted man in Yemen (he escaped from a Yemeni prison in 2003), but as with many wanted men lives comfortably with a group of tribesmen and doesn’t appear to be at risk of immediate capture. Exactly who officials killed that they assumed was Quso will remain a mystery.

2 thoughts on “Appearing in Yemen, al-Qaeda Official Denies Reports US Killed Him”