In a meeting with Defense Secretary Robert Gates, Italian Prime Minister Silvio Berlusconi warned that he believed “no one including Obama” could stop Israel from launching an attack against Iran once it had made up its mind. 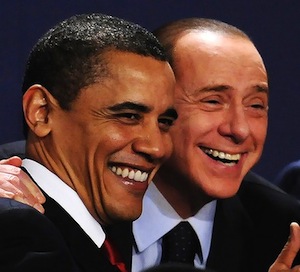 Berlusconi, who has publicly said previously that he absolutely believes Israel will ultimately attack Iran, was revealed in the new comments, part of a WikiLeaks cable, to be concerned that Israel was planning to use nuclear weapons in the attack.

Though it continues to officially take a position of “ambiguity,” Israel has a large nuclear weapons arsenal and is indeed the only nuclear weapons power in the Middle East. Israeli officials have repeatedly threatened to attack Iran over its civilian nuclear program, claiming it constitutes an “existential” threat.

Berlusconi was said to have been briefed about a 2008 Israeli Air Force exercise in which warplanes flew a mock bombing run over Greece, apparently an attempt to simulate a flight to and attack against Iran. Others, including Australia’s intelligence community, have expressed similar concerns about the possible attack recently.