US State Department officials are cheering tonight after TSA workers in Jackson, Mississippi subjected the Indian Ambassador to the United States Meera Shankar to an “enhanced pat-down” on the grounds that she was wearing a sari, traditional Indian garb. 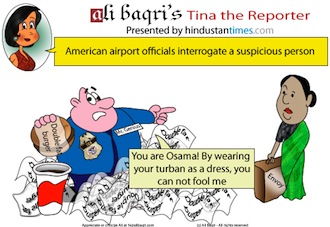 Homeland Security Secretary Janet Napolitano also defended the frisking of the Indian ambassador, insisting that it was “by the book” and that diplomats have to subject themselves to the same “basic screening” as everyone else.

But the sexually-charged pat downs are not “basic screening” in most of the world, and indeed have sparked a growing outcry from opponents in the United States, though officials maintain that the policy won’t change no matter how much popular opposition there is.

In the meantime, however, the US is going to have to contend with some serious fallout over Ms. Shankar’s groping, and India’s Foreign Minister has already pledged to raise the issue with the Obama Administration.

Indians are already upset by the TSA’s policies, and many have complained they are being singled out for being suspiciously dark-colored. The issue became prominent with many Indians after the 2009 detention of movie star Shahrukh Khan.