A newly released WikiLeaks cable describing a late 2009 meeting with European Union President Van Rompuy had the EU chief warning that “no one believes in Afghanistan any more.” 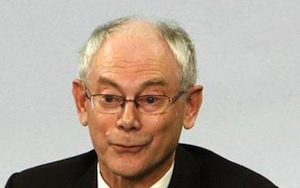 Van Rompuy, whose comments came in the wake of President Obama’s December escalation announcement, said the European nations in NATO were only going along with the war out of deference to the United States and added that by the end of 2010 he thought nations would start to bail out.

Though the comments point to a general pessimism about the Afghan War (even ahead of the record 2010 death toll) Van Rompuy’s prognostication leaves something to be desired, as a Lisbon Summit last month secured the continuation of the war in Afghanistan through at least 2014, though again, comments suggested few actually believe the war will be won even then.

Van Rompuy also predicted his native Belgium would leave if they had a single combat death. So far there have been no Belgian combat deaths, with the only Belgian soldier who died in Afghanistan having died of meningitis.