A WikiLeaks-released document from the US Embassy in Pakistan shows the embassy warned the FBI to retract allegations it made in a telegram accusing Jamiat Ulema-e Islam (JUI) leader Fazal-ur Rehman. 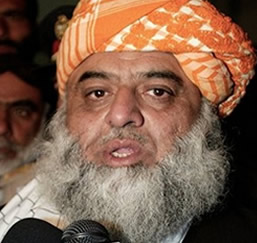 The telegram apparently accused Rehman of being involved in a March 2008 bombing against a popular Islamabad restaurant frequented by foreigners and incorrected called him the leader of the Jamaat-e Islami (JI), a different political party.

The cable insisted that while such allegations could be made against members of JI, which they said “quietly has supported jihad in Afghanistan and Kashmir,” that MP Rehman oughtn’t be accused of such things because his party was (at the time) a member of the coalition govenrment.

The cable went on to say that Rehman is a “frequent and cooperative” ally of the US embassy and has publicly supported cooperationg with the US in the war on terror. At no point in the cable does it mention any evidence against Rehman being the source of the allegation, nor why his political affiliation should change the determination.