Faced with growing complaints about the intrusive “full body scanners” and the even more intrusive “enhanced pat down” procedures the TSA is demanding of Americans who want to fly, Department of Homeland Security chief Janet Napolitano did what officials have been doing for a decade in the face of public complaints, shrugged them off. 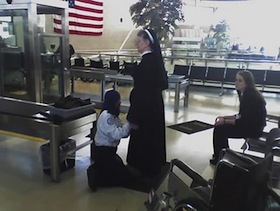 “We ask for cooperation, patience and a commitment to vigilance in the face of a determined enemy,” Napolitano said in a column in USA Today, adding that the obscene scans of passengers are “not visible to the public” and that the images can’t be transmitted, a blatant lie given that one of the few public details of the “classified” scanners says that they in fact are required to be able to transmit those images.

Napolitano also shrugged off the complaints about the pat-downs, insisting they are used by “countries across the world.” She added that the TSA isn’t just doing the procedures, described by many as de facto sexual assault “just to do it.”

It seems unlikely Napolitano’s comments, a combination of bureaucrat indifference and appeals to fear, are going to convince the public of the wisdom of the administration’s policies, but they do suggest that the Department of Homeland Security, itself a creation of Bush Administration paranoia, will not easily back down from its inexorable march toward more powers.

19 thoughts on “Napolitano Shrugs Off Complaints About TSA Policies”