The presumptive incoming head of the House Foreign Affairs Committee Ileana Ros-Lehtinen (R – FL) today said she believes that the new Republican-dominated House, and her committee in particular, will be able to push President Obama into an even more hawkish foreign policy. 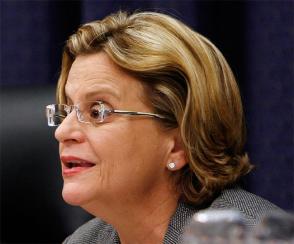 “I think it strengthens the president’s hand,” said Ros-Lehtinen saying that a “tough Congress” would allow the president to be more overtly hostile to Iran, Cuba, North Korea and Venezuela, whom she called “rogue regimes.”

Rep. Ros-Lehtinen also suggested that the new Congress could allow a more “hard line” position with respect to China, making a number of additional demands against the nation with regards to its human rights violations.

A number of returning GOP Congresspersons have suggested that they will try to out-hawk President Obama, pushing for more war funding and keeping the wars going as long as possible. This may put them in conflict with the incoming Tea Party Republicans, who campaigned around financial responsibility, not foreign policy, and will find it difficult to argue simultaneously for a balanced budget and for runaway war spending.