Speaking today in comments broadcast on the state media, Iranian President Mahmoud Ahmadinejad demanded that the P5+1 recognize “the right and greatness of the Iranian nation,” warning that “Western arrogance” could thwart the upcoming talks. 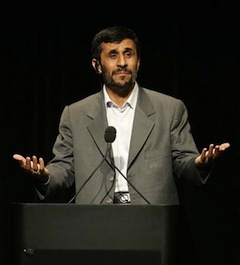 “The best path for them is to respect nations, stop being obstinate, get out of glass palaces and sit down like a polite boy and talk on the basis of justice and respect,” Ahmadinejad insisted. No date has been set for the talks, but they are expected to be held later this month.

The European Union has been trying to set up the talks for weeks, and both sides have agreed to the talks in principle. Recent reports indicate the two sides have been negotiating on a date for the talks.

Ahmadinejad also warned against reports that the US may try to impose even tougher terms on any deals coming out of the meeting, suggesting that such deals would be unacceptable. Any deals will likely be difficult to reach following last year’s talks, in which the US demanded Iran accept a third party enrichment deal, only to angrily reject the same deal a few months later when the Iranian government agreed.