Comments from one of the official publications of Iran’s Revolutionary Guards harshly condemned President Mahmoud Ahmadinejad for his criticism of the Iranian parliament, saying that the comments were an insult to the late Ayatollah Khomeini. 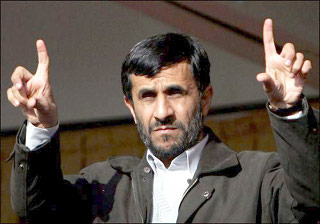 It is extremely unusual for the Revolutionary Guard Corps to single out an official for condemnation, particularly a sitting president. Whether it is an isolated incident or a sign of more rancor to come between the two factions remains to be seen.

But the comments made it clear that President Ahmadinejad’s appeals to nationalist sentiment and constant advocacy of an “Iranian school of thought” were unwelcome, warning that instead he should focus on a broader Islamic message and not a divisive nationalist one.

Ahmadinejad’s comment, made in September, took parliament to task for trying to assert itself as an equal branch of government. He warned that while Khomeini had embraced that position at one point “times have changed” and that the parliament’s duty was to support the president in whatever he decides.