Following several years in US custody which included a long history of mistreatment, Canadian citizen and former child soldier Omar Khadr “pled guilty” to US charges of war crimes for throwing a hand grenade. 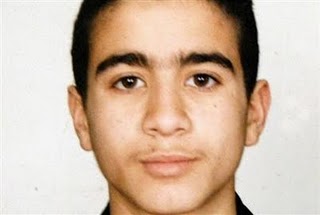 Of course throwing a hand grenade during combat wouldn’t be a “war crime” in the first place, and Khadr’s young age at the time of the incident affords him additional protection as a child soldier.

But the Canadian government issued a collective yawn today to the report of the clearly coerced confession, insisting it was “between Mr. Khadr and the American government.” Some reports had Khadr pleaing guilty in the hopes of being returned to Canada instead of spending the rest of his life in military prisons.

Which ought to be shocking for Canadians. After all, the Canadian government would generally act as an advocate for its citizens when they get detained by a foreign power, and in this case we are talking about a child soldier in the custody of a foreign military which is known to have been abusing him for years.