September saw a massive increase in the number of US air strikes in Afghanistan, with at least 700 distinct strikes across the nation, up from 257 the year prior. The strikes saw a number of incidents of civilian deaths in the aerial campaign. 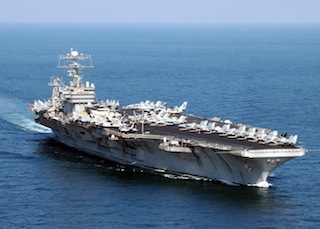 But the tactic may be even further on the rise in the future, as reports suggest that the Obama Administration has ordered the deployment of the USS Lincoln, another aircraft carrier, into the region, adding scores of additional warplanes to the theater of operations.

The use of air power during Gen. Stanley McChrystal’s tenure was on the decline, largely because the general was determined to lower the massive civilian death tolls. Though his new rules were not entirely successful in curbing the killings, Gen. Petraeus has rolled them back and seems to be seeing a commensurate increase in civilian killings.

But paring away rules restricting attacks near civilians is not enough, as Gen. Petraeus, who made air strikes the centerpiece of his Iraq War strategy, seems to be determined to find more ways to emulate that strategy in Afghanistan.