US Admiral James G. Stavridis, the current head of EUCOM who also holds the needlessly pompous title of NATO’s Supreme Allied Commander for Europe discussed the largely nebulous terror threat against Europe, insisting it justifies the ongoing war in Afghanistan. 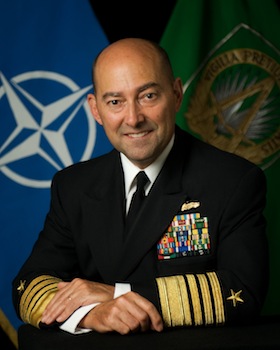 By Stavridis’ reasoning the war in Afghanistan is because of a “threat stream” including 9/11 that is continuing from the reason this day, insisting it was prima facie evidence that the war had some purpose. The US State Department issued a travel warning for the entire continent of Europe this week, citing the threat.

Yet in referencing 9/11 Stavridis underscored the flaw in his own reasoning, as nine years of NATO occupation of Afghanistan apparently hasn’t stopped the “threat stream” yet, and if that is what the war is focused on, it clearly isn’t doing a very good job.

Perhaps more troubling however is that a top NATO official is just now looking for a justification for the war over nine years after it began. This is particularly problematic when the war has been as destructive and destabilizing as this one has, and as NATO officials have been insisting for months before this “threat” arose that the war must continue virtually ad infinitum. The only conclusion then would be that the war could’ve continued forever without a justification, and that having come up with something of an excuse was simply a happy coincidence.