Reiterating previous offers to escalate the war. Ugandan President Yoweri Museveni today announced that his country was willing to provide the entire 20,000 soldiers that the African Union says would be needed to occupy Somalia effectively. 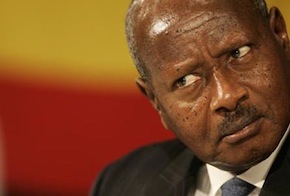 The African Union had said it would take 20,000 troops to achieve “victory” in the country and prop up the self-proclaimed government. Currently the AU force is about 7,000 strong, and manages to keep that government in control of a few city blocks along the coast in Mogadishu.

But as previous comments from the military indicate, Uganda’s willingness to provide the bodies for the occupation comes with conditions, and that some other nation would have to provide funding for the mission and well as equipment and logistics support for the force.

Uganda’s military chief insisted that his country was willing to escalate the war to virtually any level, but that they were not willing to pay the soldiers’ salaries while they were deployed in another nation. The US, which has committed to throwing nearly endless money and weapons at Somalia, was previously suggested as a likely source of funding.