Speaking to the media today after showing off some of Afghanistan’s most picturesque US-run detention centers, Gen. David Petraeus reported that certain unnamed “high ranking Taliban” leaders have approached President Karzai about the possibility of reconciliation talks. 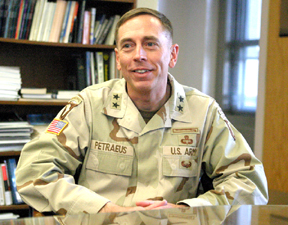 But according to Petraeus the conditions for such talks must be that the Taliban accepts the US-written constitution and completely disarms. “This is how you end these kinds of insurgencies,” Petraeus insisted.

Yet nine years into the war indications are that the fighting is going extremely poorly, and most of the moderate Taliban leaders have been arrested in Pakistan (nominally in partnership with the US but in reality because they were the most favorable to a peace deal), and if there is some willingness to hold talks with Karzai, it is likely not going to extend to a full Taliban surrender.

Which has been the problem all along, and a big part of why nine years later there is no end in sight to this conflict. Ever increasing numbers of NATO troops are propping up the Karzai government, no matter how much damage he does to his legitimacy, and US demands to make any reconciliation deal seem like a US victory are keeping the Taliban away from the bargaining table.

5 thoughts on “Petraeus: Taliban Must Disarm for Reconciliation”