Amnesty International has released a report today warning about the state of legal rights in war-torn Iraq, cautioning that since the handover of detainees from US custody tens of thousands of Iraqis are being held by the Iraqi government without charges and at risk of mistreatment, with security forces “systematically violating detainees’ rights” with impunity. 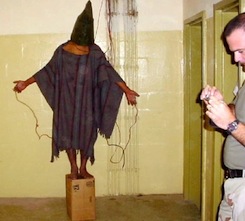 Their estimates are that 30,000 are being held without trial, and that some are known to have died in custody because of ill-treatment. Prolonged suspension by the limbs and theats of rape are cited as known tactics.

Which ought to sound awfully familiar because before the handover many of those detainees were being held without trial and without charges by the US, some of them were known to have died in custody because of ill-treatment, and detainees were subjected to prolonged suspension by the limbs and threats of rape.

Amnesty urges the Iraqi government to reform its prison system in the report, but this seems unlikely at the moment, because Iraq has only had a caretaker government since the March 7 election. There is still no indication of any government being formed soon.