The march of TV-friendly fake ends of the Iraq War celebrations roughly every week and a half continues unabated, with Vice President Joe Biden appearing on a very special episode of Comedy Central’s “The Colbert Report” to participate in the latest sham ending to a war that is very much still going on. 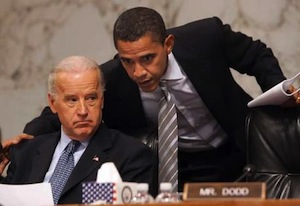 Biden’s primary mission was to serve hot dogs to the returning troops and, it seems, to give the public a sense of some historic moment in the studio. Then, as President Obama did during the last fake end of the war, he lauded President Bush.

“Mr. President, thank you,” Biden declared, adding that while “we disagreed on policy. But you deserve a lot of credit, Mr. President.” President Obama had previously praised Bush for his “commitment to our security” and lauded the war as a “remarkable chapter” in American history.

What disagreement Vice President Biden was referring to, however, remains a mystery, as he was among the loudest proponents of the 2003 invasion of Iraq, and continued to champion the war for years.

At the same time Vice President Biden insisted to host Stephen Colbert that the administration was deliberately avoiding using the term “victory” to describe what had happened in Iraq, though a number of officials, including Secretary of Defense Robert Gates, have insisted the war is “over” and President Obama admonished Americans to “turn the page” on the conflict.

At the same time 50,000 US troops remain in Iraq, and while they have been officially reclassified as “non-combat” troops they continue to participate in combat missions.