He may have finished a distant eighth place in the April referendum by Iraqi National Alliance (INA) figure Moqtada al-Sadr, but the INA has today officially endorsed Adel Abdulmahdi as their candidate for prime minister, ending months of speculation that the bloc was favoring former PM Ibrahim al-Jaafari. 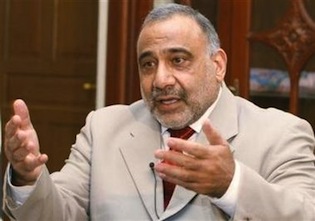 Abdulmahdi, an economist turned communist turned Islamist, has been the Vice President of Iraq since early 2005, and served as the nation’s finance minister before that. A former leader in the Iraqi Communist Party, Abdulmahdi has been a mainstay in the Supreme Islamic Iraqi Council since the early 1980’s.

This will not be Abdulmahdi’s first time as a candidate for prime minister, as in 2006 has lost his bloc’s nomination to eventual winner Nouri al-Maliki by a single vote. With Maliki now on the outs among a great many Shi’ites, Abdulmahdi may be seen as a “compromise” candidate.

But whether Abdulmahdi’s candidacy is taken seriously will largely depend on the State of Law bloc’s willingness to abandon Maliki as their candidate of choice. With both the INA and Iraqiya opposed to Maliki, many State of Law MPs are threatening to abandon the bloc and would naturally tend to float toward the INA and their candidate. This could put the third-place INA into the lead in supporters and give Abdulmahdi the momentum he needs to take power.