In an interview today with Fox Business, former US Ambassador John Bolton warned that Israel has “only eight days” left to attack Iran, and the rhetoric against Iran seems to be ratcheting up. 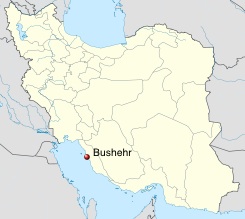 So what’s the rush? This weekend Russia will begin to load uranium fuel into the Bushehr nuclear power plant, the first stage in preparing it for launch. This fact has nothing to do with any nominal threat posed by Iran, even rhetorically, as the plant is designed purely for energy generation.

But Bushehr isn’t just a nuclear power plant, it is also a city of nearly 200,000 people along the Persian Gulf, and surrounded by a comparatively populous province along the coast.

While this isn’t particuclarly surprising, few power plants, after all, are built in the middle of nowhere, the fact that the plant is going to be loaded with 3.5% enriched uranium fuel is going to make a prospective attack, whether from Israel or the United States, incredibly inconvenient.

An attack on Iran would have to be done under the guise of targeting its nuclear assets, and that would have to include the most important asset of all, the Bushehr power plant. But the targeting of this plant would spread radioactive material across the immediate vicitinity, putting hundreds of thousands of innocent civilians at serious risk.

Attacks on operating nuclear power plants thus are unconscionable large-scale attacks on civilians, and would spark an enormous level of international condemnation on whoever launched the attack.

Even this first stage in launching Bushehr would put the target virtually out of reach, which is why the US reacted so negatively to the news that it was pending. The threat to attack becomes infinitely less credible next week, which also means that, if Israeli or US officials are bound and determined to start a war, they may be obliged to do so in the next few days, for convenience sake if nothing else.

33 thoughts on “Is an Attack on Iran Imminent?”