Yesterday President Barack Obama insisted that he believes Muslims have the same rights as everyone else in the US and that, as such, they have a right to build religious buildings on private property. 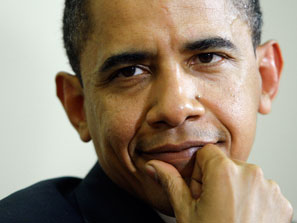 Following the predictable “outrage” at the comment, President Obama was quick to qualify it today, insisting that his belief in the legality of the project did not mean he was endorsing it, and that he would not comment on whether or not he supports the idea of the so-called Ground Zero Mosque, an Islamic Center two blocks from Ground Zero.

Perhaps trying to stay one outrage ahead of everyone else, White House official Bill Burton insisted that that the comments qualifying the last comments didn’t mean he was backing off the first comments, even though it was pretty clear to everyone that the whole point of the “qualification” was to do exactly that.

The White House had officially avoided comment for quite some time, and a number of Republican figures condemned Obama in the wake of his comment, declaring that his vague, qualified support for the legal notion of Freedom of Religion runs afoul of the general sentiment of the American people.

But the fact that President Obama so quickly retreated and started spouting the anti-mosque talking points about the site being “hallowed ground” leave one wondering, much as previous “hardline” positions he has taken and immediately abandoned, why he bothered opening his mouth at all.

The legal battle against the community center at the site continues, though with the battle to have the boarded-up, graffiti covered Burlington Coat Factory declared an historical landmark apparently lost, the possible legal recourse to stop the mosque appears slim.

3 thoughts on “Obama Backs Off Support for NYC Mosque Project”