With his office still trying to cope with outrage over his criticism of the Israeli blockade of the Gaza Strip and his criticism of Pakistan’s government, British Prime Minister David Cameron caused another stir today by accusing Iran of possessing nuclear weapons. 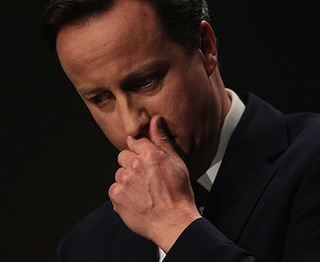 Speaking about Turkey’s interest in joining the European Union, Cameron claimed that the membership could address problems “like the fact that Iran has got a nuclear weapon.” Iran, of course, does not have nuclear weapons. Some of Cameron’s aides admitted he “misspoke” and said he was “sorry,” while others maintained that “he is talking about the pursuit of a nuclear weapon.”

The opposition Labour Party was quick to mock Cameron, with one MP declaring “he is increasingly getting a reputation for being a foreign policy klutz, with two right feet, both of them firmly planted in his mouth.”

Cameron’s lack of clarity in his claims about Iran are likely to be of particular issue, however, as he used Iran’s fictional weapons program, along with the “Chinese threat,” as reasons for Britain spending large sums of money on new nuclear weapons of its own.