House Armed Services Committee Chairman Ike Skelton (D – MO) warned Americans against drawing any conclusions from the 92,000 classified documents published yesterday in the press, insisting that they were “outdated reports” that should never have been made public. 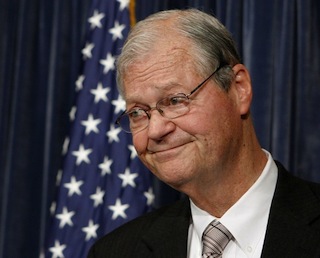 “Our nation’s secrets are classified for a reason,” insisted Skelton, adding that he leaks were “reckless” and had put national security in serious jeopardy. He also praised Pakistan for its cooperation in the war, despite large numbers of the documents alleging that Pakistan’s spy agencies were in no small part supporting the insurgency.

The leaks told the tale of an ever worsening war, and a military that knew full well how bad things were getting even as they were telling Congress, as recently as the past few weeks, that things were turning around.

Yet Rep. Skelton seemed undeterred in his boundless optimism for the transformative powers of the disastrous war, insisting that “we now have the pieces in place to turn things around. These leaked reports pre-date our new strategy in Afghanistan and should not be used as a measure of success.”