The United States has rejected the claims of the Chinese government to territorial control of a number of tiny islands in the South China Sea, with Secretary of State Hillary Clinton insisting the US had a strong “national interest” in ensuring the islands remain open. 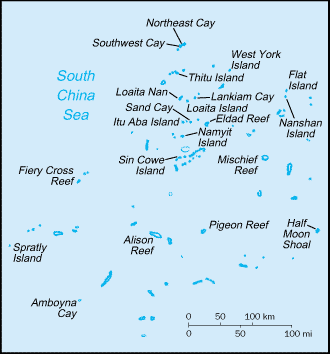 Though long of little real value, the islands are said to have a significant oil and natural gas deposit, and the claims over the territorial waters around the islands could be valuable in expanding shipping in the region.

The US declaration comes as Admiral Michael Mullen warned today that China is taking a “more aggressive” stance on the high seas, and that he has gone from being “curious” about Chinese claims to the Spratly Islands to “concerned.”

The comments are a big victory for Vietnam, which has also claimed a number of the unpopulated islands. The Chinese and Vietnamese navies have previously clashed over the claims.

But they aren’t the only two nations claiming some or all of the 100+ islands. Taiwan also claims the entire region for itself, while Malaysia and the Philippines also claim portions of the island chain. Roughly 45 of the islands have tiny military presences of one nation or another, and as their value rises officials warn it could become a source of conflict.

2 thoughts on “US Rejects Chinese Claims to Spratly Islands”