Addressing the United Nations today regarding its many, many violations of the International Covenant on Civil and Political Rights (ICCPR), the Israeli government declared that it believes the treaty, which it ratified in 1991, does not apply in the occupied territories. 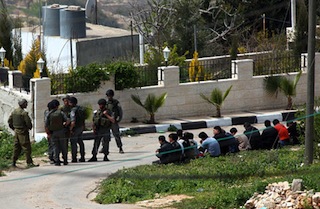 The delegation to Geneva argued that the Israeli government believes the ICCPR “does not apply, nor was it intended to apply, to areas outside its national territory.” They added hat Israel has only “limited” control over West Bank and the Gaza Strip, and that therefore it would be impossible to ensure that these rights were respected.

Instead, Israel believes that the ICCPR only applies inside the pre-1967 borders, and that people living in Israeli occupied territories enjoy “some measure of rights gurarantees” under the Geneva Convention rules for armed conflict. Of course Israel is often accused of violating those as well.

The ICCPR guarantees, among other things, the right to self-determination, freedom of religion and speech, protection from arbitrary detention and torture, and non-discrimination and equality before the law. Even putting aside for the moment the question of the occupied territories, Israel faced numerous questions about whether it is complying with this law within Israel-proper, particularly with its treatment of Israeli Arabs.

Much of the treaty can be argued not to apply at any rate under times of emergency, and so another key focus of the talk was Israel’s perpetual “state of emergency,” which has been in place across the nation since its founding in 1948.

The UN human rights experts, for their part, argued against Israel’s claim, and said that indeed the ICCPR does apply and that Israel can not “just sweep aside the application of the Covenant in the occupied territories.” The decidedly unequal treatment of Arabs and settlers within the West Bank in particular could be seen as a gross violation of the treaty, as would the large number of summary detentions of Palestinians by the military.