Speaking today at a reception for her Israeli counterpart, US Ambassador to the United Nations Susan Rice vowed that the United States would remain eternally committed to ensuring Israel’s regional military superiority and promised that they would continue to shield Israel from diplomatic fallout for its behavior at the United Nations. 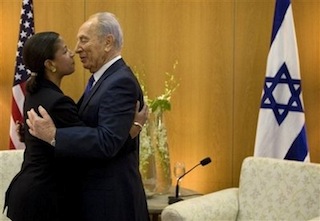 “As U.S. President Barack Obama pledged, we will continue U.S. efforts to combat all international attempts to challenge the legitimacy of Israel—including and especially at the United Nations,” Rice declared.

Though the US military subsidies go back decades and cost several billion dollars annually, the use of America’s veto power at the United Nations to shield Israel from critical (or even inconvenient) resolutions remains the far more valuable pledge, particularly with the nation’s current right-far-right coalition government so fond of flouting international expectations.
˜
Indeed the military aid seems largely unnecessary, even if Israel intends to continue its bellicose course (as all indications suggest they are). Israel’s recent military conflicts, in southern Lebanon and the Gaza Strip, come against regions with no real military to oppose their invasion, and even the plan for the long anticipated war with Iran seems to amount to Israel launching air strikes against Iran and drawing the United States into the war in its defense.

Rather Israel’s military amounts chiefly to a major federal subsidy on US arms contractors, as much of the aid never actually touches Israeli coffers and rather goes straight to arms companies who ship Israel more weapons that, even for a nation with universal conscription that is perpetually at war, it rarely needs.