Speaking to reporters at a breakfast this morning, Sen. Carl Levin (D – MI) called for escalating the Obama Administration’s policies of airstrikes against Pakistan’s tribal areas, and singled out a major tribal group for inclusion on the US terrorism list. 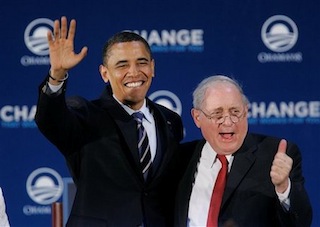 “We know where they are, we know where their headquarters is,” Levin declared, adding that he believes the various militant groups “directly threaten the Afghan mission” and that they should be targeted.

Addressing previous complaints about the large number of civilian deaths in the attacks, Levin insisted that he believes the Pakistani government has “accepted, off the record” the need for the air strikes and that they are actually “helping” Pakistan in its assorted wars in the region, each of which of course has been demanded by the US.

Levin, who was recently in Pakistan and Afghanistan, also praised the ongoing war, declaring that Afghanistan’s army is “respected” by people now and that they will more than meet administration targets for the size of the military.