Costa Rica’s opposition is expressing increasing opposition to the government’s agreement to allow the United States to send a significant force, 7,000 US Marines and 46 warships, into the tiny Central American nation. 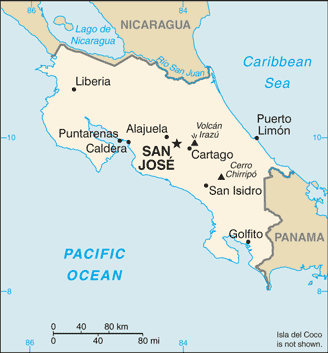 Ostensibly the extension of a long-standing agreement to cooperate in the US war on drugs, the new version actually explicitly allows the US to send warships instead of Coast Guard ships and allows the troops to “carry out the activities it deems necessary” in the nation, basically giving the US military a blank check for all operations in Costa Rica.

The “People’s Movement” party panned the deal, saying it turns the nation into a “US Protectorate,” while the Christian Social Unity Party insisted the deal violated the Costa Rican Constitution.

The nation’s value to the US war on drugs seems to be primarily its narrowness, allowing it to act as a choke-point for blocking ground transport of drugs from South America to Mexico.

It is particularly controversial in Costa Rica, however, because the nation has no military of its own, having abandoned it in 1948 and enjoyed unrivaled peace and stability (compared to its neighbors) ever since. Costa Rica continues to celebrate a national holiday on December 1 called Military Abolition Day.